The World Cup causes unparalleled excitement every 4 years for soccer fans around the world. For those lucky enough to go to Brazil for the 2014 World Cup, there’s more to see than just soccer over the course of the 4 week tournament. 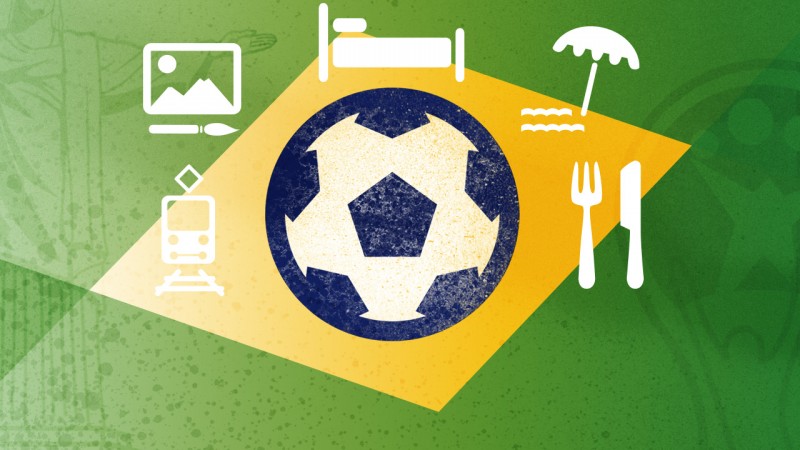 Lucky for us, we have plenty of in-house Brazilian editors who’ve helped us compile a non-exhaustive list of 11 mobile apps that’ll help you make the most of your trip to Brazil for World Cup 2014.

Accomodation : Where do you stay?

Hotels and hostels in Brazil are probably overloaded for this year’s World Cup tournament, so why not go the alternative route and take a look on Airbnb? This service, where homeowners rent out their properties to vacationers, is used in many countries and has become really popular (and useful) in the past year.

If you want to go the more traditional route, the Booking.com app is a must for online booking. Just like the website, the mobile app lets you filter options by price, area, and type of room, among other filters.

Do you want to find hotels that aren’t necessarily shown in tourist guides or general apps? Try Hotel ASAP. Highly recommended by our Brazilian colleagues, this app includes the most interesting and unique hotels in the country.

Restaurants: Discover the best restaurants in the country

More than just a directory of places, the Nativoo app (Android and iPhone) is a comprehensive tourist guide. Restaurants, hotels, transport, and landmarks are all included in the app, making it the perfect ally for your trip to Brazil. The app is available in several versions for most major Brazilian cities.

You can download Nativoo guides for the following cities:

The geo-location app has just undergone a complete overhaul. With the division of Foursquare’s social aspect to a new app, Swarm (on both Android and iOS), the developers leave Foursquare as an app to recommend restaurants, hotels, and other places around the city, all based on your tastes.

Travelling to Porto Alegre, the largest city in southern Brazil? In this case, you can not miss Comer na Boa. This app lists the best restaurants in the city, as well as ratings and comments posted by other customers. Southern Brazil will welcome you with open arms.

Concierge Brazil apps are all published by Guia 4 Rodas, one of the most respected travel guides in Brazil. To celebrate Brazil’s choice as World Cup host, the publishers released an app for each host city of the competition. The guides are highly recommended for anyone interested–directly or indirectly– in Brazil.

You can download Concierge Brazil for the following cities:

Available for iPhone and iPad, the Brazil Mobile app aggregates and classifies all of Brazil’s attractions by category. Despite its somewhat outdated interface, Brazil Mobile gives you all the info you need to know about Copacabana, Iguazu Falls, or the Maracana stadium.

You can download Brazil Mobile for iPhone and iPad for the following cities:

For all those lucky enough to go to Brazil, it looks like there have been many more before you: TripAdvisor is very popular and a great resource in the World Cup host country. This tourist guide has info about the best restaurants and hotels in the country, as well as offering helpful tips and travel information of every kind.

For those who still don’t know about Waze, it’s a free GPS for smartphones. The idea? Connecting all drivers for better traffic warnings, including traffic jams, construction, and accidents. Traffic in Brazil is not particularly fluid, so it might be a good idea to download the app so that you don’t miss any World Cup games.

Need a taxi to get safely back to your hotel? Try Easy Taxi. This booking service works in all World Cup host cities. Just like Uber, you press a button and the taxi nearest you will come and pick you up.

To make sure you don’t miss anything during your stay in Brazil, we recommend that you install all of these apps. Some are standard, but useful, while others will help you make the most out of your trip to Brazil.

Of course, you’re most likely in Brasil for the World Cup tournament, so make sure to check out our guide for following the 2014 World Cup in Brazil through social media.

If you liked this article then you'll love our newsletter!

Join us to receive hilarious memes, photo galleries, tips&tricks, and the best games!

The World Of Warcraft Arena World Championship is Back